Skip to content
Rick’s Tips #1 - January 26, 2023If an Employee Has Left and Violated a Non-competition and/or Other Restrictive Covenants, We Can Help - January 24, 2023Business Owners: Contact our Attorneys to Help Secure and Collect What is Owed to You - January 23, 2023Buyer Beware: Before Purchasing a Business, Take Steps to Protect Against Potential Liability for the Seller’s Unp - January 19, 2023Selling Your Business? Consider Asking Potential Purchasers to Sign an NDA Before Providing Sensitive Business Informati - January 18, 2023 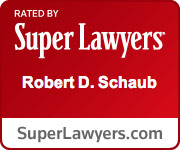 Mr. Schaub has tried numerous cases to verdict. He has a concentration in business litigation and has handled numerous injunction hearings involving covenants not to compete. Mr. Schaub has been involved in numerous matters involving closely held and family owned businesses, and has been able to effectuate very favorable resolutions, with and without litigation, on behalf of clients.  Within the last 24 months, Mr. Schaub has been involved in nine cases involving requests for injunctive relief.  He was involved in the representation of Emilio and Gloria Estefan who were injured in an interstate tractor trailer/bus accident in the Pocono Mountains. He has also successfully represented many clients who suffered significant personal injuries and the family members of wrongful death victims, including the families of four victims who were killed in a tragic boating accident. Many of these personal injury matters involved complex economic loss issues, and Mr. Schaub has drawn upon his business litigation experience to obtain very significant recoveries. Most recently, Mr. Schaub has represented clients in all aspects of litigation involving Marcellus Shale issues, including leasing disputes, will contests, and gas pipeline issues.  These Marcellus Shale cases involve construction contracts in excess of 100 million dollars, as well as class action litigation.  Mr. Schaub has managed litigation teams through the investigation, pleading, discovery and trial stages.

Mr. Schaub was recently appointed as a hearing committee member for the Disciplinary Board of the Pennsylvania Supreme Court.

Mr. Schaub has repeatedly been selected to the Pennsylvania Super Lawyers List, having demonstrated excellence in the practice of law. This highly selective honor is limited to no more than 5% of attorneys in Pennsylvania.

AV® Peer Review Rating by Martindale Hubbell — This rating attests to a lawyer’s legal ability and professional ethics, and reflects the confidential opinions of members of the Bar and Judiciary. The AV® rating is a testament to the fact that a lawyer’s peers rank him at the highest level of professional excellence for those practicing law for more than 10 years.